I study slum growth in contemporary urbanization processes by estimating a spatial equilibrium model with houses with and without basic water and sanitation services in Brazilian cities between 1991 and 2010. Slum growth results from households moving to cities following higher wages (elasticity of 1.7), this movement impacting cities’ serviced housing rents much more (elasticity of 0.4) than unserviced ones (elasticity of 0.1), and these rent changes impacting households’ location decisions more for serviced (elasticity of -0.5) than for unserviced houses (elasticity of -0.4). I show that the effect of urban economic growth on cities’ slum incidence depends critically on what happens in other cities. When a few cities grow, they experience higher slum incidence because they are the focus for migrants coming from rural areas and less dynamic cities. When all cities grow, slum incidence declines in all cities as a result of two forces. First, each individual city faces less housing demand pressure as migration between cities becomes more balanced and rural migrants flow to all cities. Second, generalized economic growth improves households’ incomes nation-wide, allowing households to switch to higher quality non-slum housing. In terms of common slum policies, I show that the effects of slum repression on any individual city are mild and decrease with the number of other cities repressing slums. If all cities repress slums by making unserviced housing 20% more expensive, this lowers aggregate urbanization by 0.4% and low income households’ welfare by 1.1%. On the other hand, a generalized slum upgrading policy turning 10% of cities’ 1991 unserviced housing stock into serviced housing, increases aggregate urbanization by 1.1%, low income households’ welfare by 4.0%, and high income households’ welfare by 3.6%. 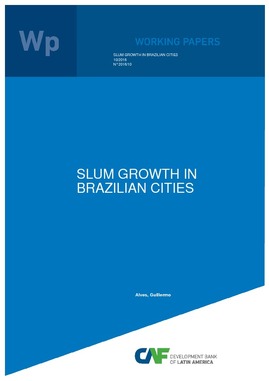 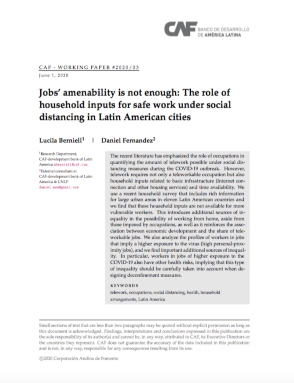 Jobs’ amenability is not enough: The role of household inputs for safe work under social distancing in Latin American cities

The recent literature has emphasized the role of occupations in quantifying the amount of telework possible under social distancing measures during the ... 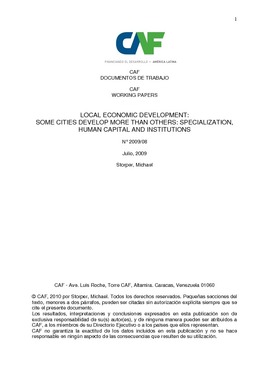 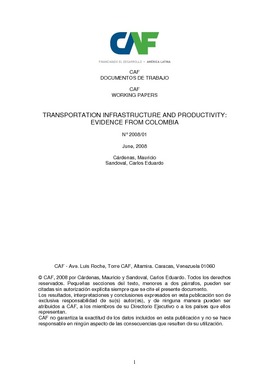 This paper analyses the role of transport infrastructure in determining plant level TFP. We calculate TFP from the annual manufacturing surveys using ...