This study investigates how early-life conditions interact with subsequent human capital investments to influence future educational outcomes. To provide causal evidence, we exploit two sources of exogenous variation: i) variation in early-life environments resulting from a child's exposure to extreme rainfall and drought shocks in early-life; and ii), variation in subsequent investments resulting from the availability of conditional cash transfers (CCT) that promote investments in children's health and education. Using Colombian administrative data, we combine a natural experiment with a regression discontinuity design using the CCT assignment rule. Results show that, although the CCT has an overall positive impact on children's educational outcomes, it does not have a differential effect on children exposed to early-life shocks; however, the overall effect of the program is large enough to mitigate the negative impact of the weather shock. These findings have important policy implications as they provide evidence of the role of social policies in closing gaps generated by early-life trauma.

This paper provides novel evidence on trends in intergenerational earnings mobility in a developing country and explores some transmission mechanisms ...

The Effect of the Minimum Wage on Employment in Brazil

During the economic boom of the early 2000s, most Latin American countries increased their minimum wages. In Brazil, the real minimum wage increased by ... 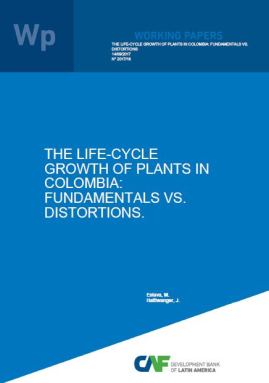 The Life-cycle Growth of Plants in Colombia: Fundamentals vs. Distortions

We take advantage of rich microdata on Colombian manufacturing establishments to decompose growth over an establishment’s life cycle into that attributable ...