The impact of lowering the payroll tax on informality in Colombia

The Colombian government recently reformed the tax law by reducing payroll contributions from 29.5% to 16% and substituting them with a profit tax. The law was passed in December 2012, and two years later the informality rate in the 13 main metropolitan areas diminished from 56% to 51% in December 2014 (using the legal definition of informality). In the whole survey the reduction was a little less pronounced, going from 68% to 64%. This period was also characterized by high, yet also diminishing growth rates; changes in the tax rates, and increasing real minimum wages. It is of the most interest to know how much of this reduction was due to the tax reform. This paper performs this task using a Matching and Difference in Differences methodology. According to the results, the tax reform reduced the informality rate, of the workers affected by the reform in the 13 main metropolitan areas, between 4,3 and 6,8 p.p. which translated in a reduction of the informality rate between 2,0 and 3,1 p.p. given that the treated population was only 45% of the working population of the country in 2012. The impact over the whole survey was between 4,1 and 6,7 which translates into 1,2 to 2,2 p.p. impact on the informality rate of the whole country. Similar results were found using the firm definition of informality. The reform affected mostly salaried workers and employers, males between 25 and 50 years old and workers with low levels of education. 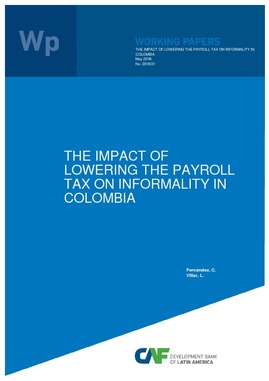 The impact of lowering the payroll tax on informality in Colombia (877.8Kb) 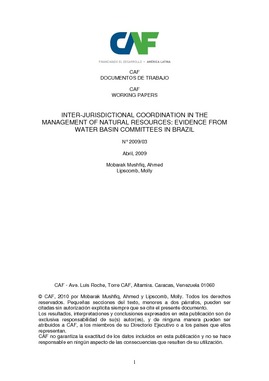 Inter-jurisdictional coordination in the management of natural resources: evidence from water basin committees in Brazil

Decentralized management of public goods creates the potential for spillovers across jurisdictions. These spillovers may be particularly large in the ... 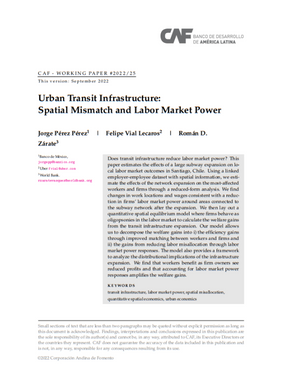 Does transit infrastructure reduce labor market power? This paper estimates the effects of a large subway expansion on local labor market outcomes in ...